Three Stars – Week 8? What week is it even? Anyways, I have never written three stars, but don’t worry humans, this won’t include anything about sex toys or mean girls. I, however, still like to be #unique so this will also include Three Not Stars.

Steve stood on his head in his game against Rotten Math. Made some insane saves and absolutely crushed it. He then proceeded to be a trooper and subbed for the first half of the Riots vs. Demons game where he again made save after save, playing a major role in keeping the Riots in the game in the first half of the game. Additionally, he is getting a star for his truly peak negotiating skills with Math’s captains. Steve put his impressive lawyering to good use to secure his team some extra ladies. Not only did he do it the day prior vs. waiting until he got to the courts, he also offered financial and goal compensation, and he gave a big hug of thanks for putting up with his bargaining.

Pull your jaws up off the floor, you read that right, a Poutine player is getting a star. Don’t worry, I already checked, the sky isn’t falling. Poutine had a by-week and despite that, Nico still showed up to the courts and reffed 4 games – HINT, WINK, NUDGE, we still don’t have enough refs, so sign up to ref! Four games of flawless reffing, a pretty thankless job is deserving of some stars, a big mac truck sized thank you, and some free beers from everybody else in the league.

** Embarrassing picture not available at this time… Instagram friend request is still pending. **

As all of you have likely noticed, the youths like to spend Saturday nights, hanging out at the Tompkins courts, popping mad wheelies (that’s a skateboard term, right?) then popping mad bottles, and smashing them on the courts so that there are shards of glass all over the place. Which makes it super duper unsafe for us to play. AliCat, despite not being a player in the league, proceeded to sweep it all up, like that absolute boss she is. HINT: would be super cool if players of the league could get there early, help out, and clean up the glass!

** Absolutely no credit of any kind to Russ as he played no role in AliCat being awesome. 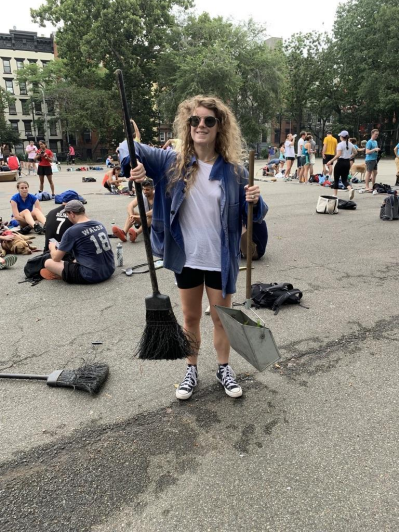 The Demons minus Rubens. A team who usually runs away at the very idea of rain. It seems they have turned a new leaf and not only showed up for their game, they even played through the drizzle and ended up winning.

Jamie of Rotten Math for scoring her first ever BTSH goal

Jack aka Tadpole for subbing in net for Lbs and doing a surprisingly very good job.

Hero & Jack for gracing us with their perfect presence. Special shout to Jack’s excellent coaching skills. He’s very vocal from the bench, and his team is really appreciative of that. Hero is getting a mention, because Glanzer only gave up writing the Stars this week so long as I mentioned Hero.

Ninetails, Cat’s contingency on letting me write the stars this week. I had to google what this is and what it means. Ninetails is a pokemon character that is categorized as a Fox whose abilities are Flash Fire. It is non-binary and stands at 3’7” and weighs a solid 43.9lbs. I didn’t understand any of the other things that the websites said, but still a very elegant and pretty looking animal.

Third Not Star – The Rain

Rain is almost as pesky a beach as Karma. Rain gave us some serious moments of cancellation fears with a heavy drizzle starting in the first half of the 1:45pm games, however she ultimately held off for the rest of the day and waited to unleash until after the last game ended. For that, we are very thankful, so it is awarded Third Not Star

He didn’t play, I assume because he was too frady scared of the rain, however he let his team take the risk and go out there and play instead of just outright trying to cancel the game. For that he gets the Second Not Star.

First Not Star – The Butthead who stole Lbs player’s purse

Unfortunately, we had an incident where an unknown individual came through and stole somebody’s bag, which totally sorks big time. Obviously, we are adults and all responsible for our own things, but we all want to have a safe environment to play, drink, and hang with friends, so keep your eyes peeled. If you see somebody lurking who is clearly not part of the league, be cognizant of it and say something so that people can make sure their belongings are safe and sound! #seesomethingsaysomething The d-bag thief gets the First Not a Star!

Honorable Not a Star Mention:

Derek Zaentz for calling his girlfriend “Hon” on the courts during play of game. Be better, Derek!